Up to 80% Off*! The Great Oxford Sale @ Oxford Bookstore Kolkata. 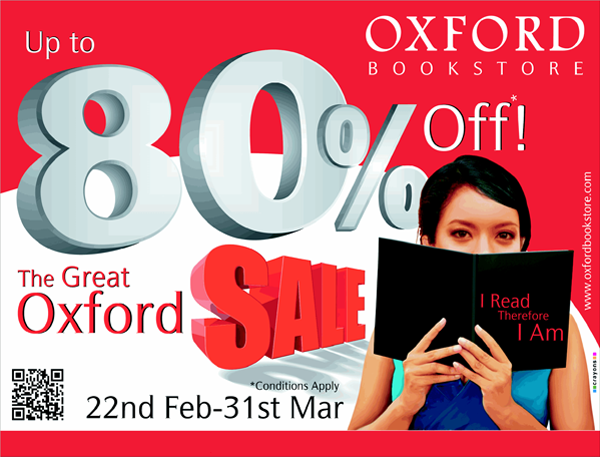 Save with Oxford Bookstores Offers in Kolkata India

Up to 80% Off*! The Great Oxford Sale @ Oxford Bookstore Kolkata.

Oxford Bookstore, formerly known as the Oxford Book & Stationary Co., was established in 1920, over 89 years ago in the city of Calcutta in India. Located in the most prominent part of the city, it became, in no time, a favorite among book lovers. Today, Oxford Bookstore has a prominent presence in Mumbai, Bangalore, Goa, New Delhi, Chennai and Bhubaneswar. The most modern facilities, a great collection of books, fantastic service and a blend of modernity and tradition; this is what Oxford Bookstore represents. Its clientele includes students, professionals, businessmen, housewives, young children, retired professors, tourists to name a few. The timely and enthusiastic service provided by a dynamic team at Oxford adds more value to its goodwill. Sections of books available include fiction, business, new age, travel, arts, green books, computer, Indian writings and vernacular books.

Kolkata is a melting pot of culture and tradition and leaves its distinct mark on anyone who has passed through it. Every experience is unique in Kolkata and one must imbibe it fully. Check out Online Shopping Discount Coupons and get best deals in Kolkata Visit Oxford Bookstores Showrooms and Store outlets in Kolkata and benefit from the ongoing Sale Offers.