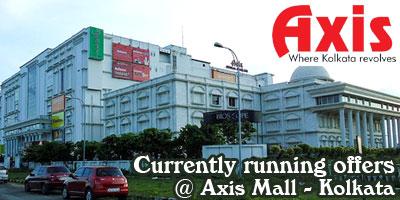 Axis Mall Kolkata, a landmark lifestyle shopping complex in Kolkata, is owned by Bengal Peerless Housing Development Company Limited, a Joint Venture Company. It has a melange of hang-out joints and institutions including Themeplexes, Food Courts, Banks, Commercial Houses, Tennis Academy and Club apart from a number of shopping brands. It is built on an area of 5 lakh sft. and divided into 3 blocks. Brands found here include Indian and International names like Reliance Retail, Spencer, Nike, Adidas, Color Plus, Ronak, Puma, Raymonds, Spyker Jeans, Levis, Moustache, Gili India and more.

Kolkata is a melting pot of culture and tradition and leaves its distinct mark on anyone who has passed through it. Every experience is unique in Kolkata and one must imbibe it fully. Check out Online Shopping Discount Coupons and get best deals in Kolkata Visit Showrooms and Store outlets in Axis Mall - Kolkata and benefit from the ongoing Sale Offers.