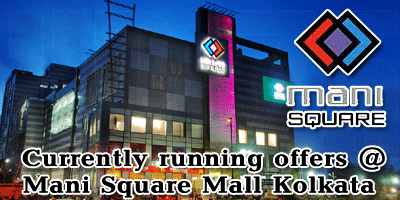 The Mani Square Mall, owned by the Mani Group, is a relatively new shopping mall that has captured a major portion of the market in Kolkata. It has well-defined fun, entertainment, food and shopping areas. For the convenience of its customers, it offers a parking space with a huge capacity of over 1200 cars. It also holds over 500 two-wheelers at a time. The shops at Mani Square Mall include Spencers, Westside, E Zone, Collection-I, McDonalds, Imax, Amoeba and Scary House along with major brands like the United Colours of Benetton, Zodiac, Stanza, Eye-Plus, Reebok, Adidas, Lee Cooper, Dockers, Levi's, USI, Blues & Blues, Tissot, Otobi, Little Shop, AND, Eye Catchers, Raymonds, Strauss, ColourPlus and more. The restaurants at Mani Square Mall, apart from McDonalds, include Costa, Rajdhani Thali, Mozzarella, Haka, Flame 'N' Grill, Machaan, Cookie man, Biscotti, Aqua Java, Plus and New Zealand Naturals to name a few.

Kolkata is a melting pot of culture and tradition and leaves its distinct mark on anyone who has passed through it. Every experience is unique in Kolkata and one must imbibe it fully. Check out Online Shopping Discount Coupons and get best deals in Kolkata Visit Showrooms and Store outlets in Mani Square Mall - Kolkata and benefit from the ongoing Sale Offers.