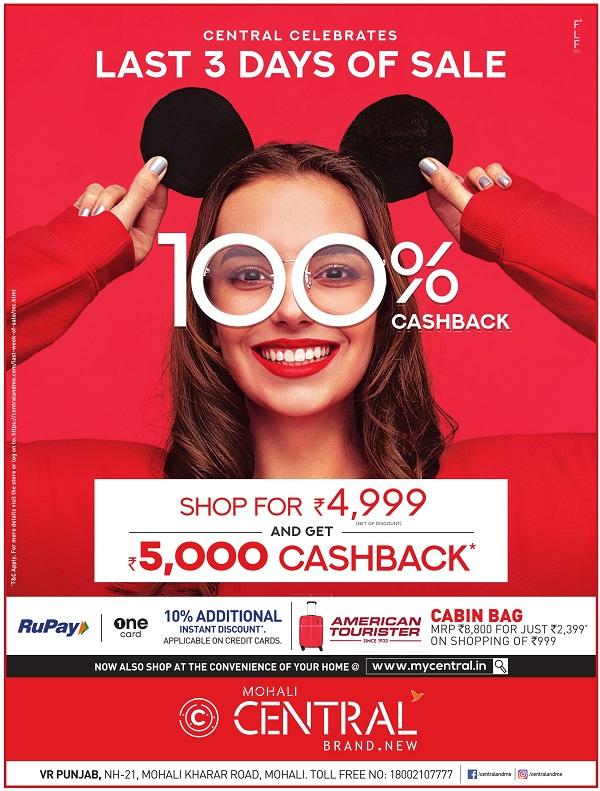 Save with Central Offers in Chandigarh India

Stores / Outlets of the Central in Chandigarh:
Note: Offer may not be running in all the outlets. Please crosscheck.

T&Cs and more Info on Central

Central, a part of Pantaloon Retail India Limited, was launched in the year 2004. It is the first of its kind in India and showcases all the major Indian and International brands. At Central, you can access over 300 brands across categories including apparel, footwear and accessories for women, men, children and infants, Music, Books, Coffee Shops, Food Courts, Super Markets (Food Bazaar), Fine Dining Restaurants, Pubs and Discotheques. They also have a section for Cinema, Ticket booking, Bill Payments, Finance, Investment, Insurance and a host of other such services. They also hold exhibitions, product launches and events in a place called the Central Square. Today, they have outlets in Bangalore, Hyderabad, Mumbai, Delhi, Ahmedabad, Kolkata, Pune and seveal other cities.

About Chandigarh: Chandigarh, the capital city of both Punjab & Haryana, is one of the earliest planned cities in India and reflects urban architecture and design in all its splendour. At the same time, being covered by dense flora & fauna, this city is well-known for its wild life sanctuaries and bird parks. With the best of 2 worlds, Chandigarh is an ideal destination for urban dwellers to visit and live in. You could indulge in loads of shopping here with budget options like Sector 17 Market, Shastri Market, Palika Bazaar and Rehri Market as well as malls like DLF City Centre, TDI Mall, City Emporium Mall, Elante Mall, VR Punjab, Dhillon Plaza, Cosmo Mall and DT Mall.

They also have some really good Salons and Spas to give you that gorgeous chic look you have always wanted. Names like Tress Lounge, Headmasters, Blush in Style Unisex Salon, Toni & Guy, Hair Rasierz Salon, Top Notch, Azzaro Unisex Salon, O2 Spa, Blue Terra Spa, Amaira Spa, Tuscany Spa, Aura Thai Spa, Quan Spa and SamaYan Spa invoke trust and comfort! If you are on the lookout for some exquisite tasty bites, their list of restaurants like Garlic And Greens, Virgin Courtyard, Chilli & Pepper, Cafe JC’s, The Café @ JW, Saffron, Barbeque Nation, The Great Bear, Virgin Courtyard, Black Lotus, Dera, OKO, Urban Café, Pal Dhaba, Mainland China, Baluchi and Essence give you just what you need. If both food and stay are on your menu, check out some grand resorts in and around this city including the Timber Trail Resort, Kikar Lodge, Golden Tulip, Kasauli Resort, Surya Vilas, Casba Farm Stay, Aura Vaseela and Moksha Himalaya Spa Resort, among others! Visit Central Showrooms and Store outlets in Chandigarh and benefit from the ongoing Sale Offers.
You may also be interested in:
Amazon Mobile Offers | Flipkart Mobile Offers | Makemytrip Flights Offers | PayTM Offers